Conquering Procrastination | Take Back Your Temple 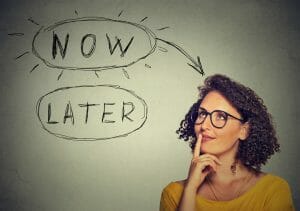 I used to procrastinate terribly on things I knew I should do but I did not want to do. One of those things was cleaning up the kitchen.

Oh, I would do it eventually but I would have fight a lot of mental resistance first.

But now I can do it with no problem because I’ve found a process that works for me.

If you practice them, they can help you with conquering procrastination too.

The process boils down to 2 things:

Here is how it works:

When I tell myself that it is time to clean the kitchen, the mental resistance starts.

But rather than continuing to sit on the sofa, trying to convince myself to move, I get up immediately and move to the kitchen, facing the very thing I’m resisting.

This strategy reminds me of the story of how David faced Goliath.

Rather than running from the giant as the other men in the Israelite army had done, David did the opposite. 1 Samuel 17:48 says:

So it was, when the Philistine arose and came and drew near to meet David, that David hurried and ran toward the army to meet the Philistine.”

The biggest energy you ever have to exert is moving from rest to motion. So just the act of moving toward the thing you’ve been resisting is a big win!

Next, as you start doing the thing you’ve been resisting, you may start feeling physically tense or thinking, “I don’t feel like it” “It’s so hard” and other “whining” thoughts.

To combat this in myself, I shift my mental focus.

In the case of cleaning the kitchen, the biggest mental resistance I face is unloading the dishwasher and putting the dishes back into the cabinets.

So when I start to whine mentally, “I don’t feel like doing this,” I open up the dishwasher and start reciting scriptures out loud as I’m moving to complete the task.

When you speak out loud, you’ll notice that your thoughts pause to listen to what you are saying automatically. So use reciting scriptures to your advantage!

This strategy puts your mind to work on useful mental activity rather than on useless mental activity. Mentally complaining and resisting the activity is useless since the task has to get done.

On New Years, I set a goal to memorize the entirety of Psalm 119 by the end of this year, God willing.

As of this writing, I’m on stanza #9 (Teth) out of 22. So while I am cleaning up the kitchen, I will recite the stanzas I have memorized so far out loud.

As I recite God’s word, it becomes a form of Christian meditation, a way to focus on Him even in the midst of work.

This practice demonstrates the truth of Isaiah 26:3:

You will keep him in perfect peace, Whose mind is stayed on You, Because he trusts in You.”

I’ve discovered that as I use the combined powers of movement and positive mental focus, I procrastinate less.

As you put this strategy into practice, you’ll discover an amazing thing:

The procrastination “weighs” more on you than actually doing the thing that you are resisting!

Here are two reasons you must conquer procrastination in your life.

The energy that you could be using to accomplish your goal is instead being used in a negative way – to resist doing something you may want or need to do.

It’s like pushing against a brick wall. Yes, you did something. But did you move anything forward?

The root word of procrastination means “forward to tomorrow.” So the person procrastinating assumes that they will have a tomorrow to which you can forward things!

But that is presumptuous thinking because tomorrow is not promised to you.

Jesus valued His time on Earth. John 9:4 records Him as saying:

I must work the works of Him who sent Me while it is day; the night is coming when no one can work.”

It’s best to embrace today while it is today, in appreciation for the gift of presence the Lord has given you.

Procrastination is a response to fear – real or imagined. Unconsciously, you are thinking the thing you are resisting is going to be painful. So you don’t do it.

The truth is, you can do all things through Christ, who strengthens you!

However, the only way to prove that to yourself is to do the thing. So practice your movement and mental focus and see if you start getting more things done.

P.S. When it comes to weight loss, do you often know what you should do but have a hard time doing it?

I struggled with this issue on my own weight loss journey, but I discovered that “Nothing is different until you think differently.” – Pastor James MacDonald

The value of the Take Back Your Temple program is that you will learn how to think differently through using Biblical keys to overcome obstacles. You’ll discover how to win the Spiritual and mental battle that often causes us to become inconsistent and get off-track on our weight loss journey.

Join a community of like-minded Christians losing weight and keep it off.